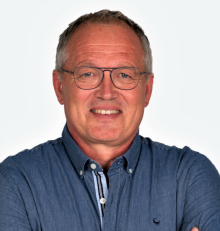 Søren Hermansen, speaker, author, and award winning sustainable energy innovator. Søren is Director of the Energy Academy on Samsø, an island to the west of Copenhagen that is home to more than 4,000 people. In 1997 Søren initiated the transformation of Samso’s energy sourcing, creating an island that not only meets its own needs with clean self-generated electricity, but also sells its surplus energy to the Danish national grid. TIME magazine boldly named him one of the world’s 10 largest ‘environmental heroes’!

Since Samsø’s energy transformation, Søren has become a much-sought advisor and consultant to energy projects around the world. He also hosts a stream of visitors keen to see how to create on-the-ground change in communities’ attitudes to energy generation. Every year 6,000 people visit the Samsø Energy Academy, including many politically funded delegations from all over the world.

Søren won the Goteborg-award in 2009, as the first Danish person ever, for his work with sustainable energy on Samsø. The award, also known as the environmental version of the Nobel prize, was won by Kofi Annan in 2011. Earlier winners include Al Gore and Gro Harlem Brundland. In November 2011 he received the Svend Auken prize from the prime minister, and in December he released his book Community – On community efforts in practice and Collaboration Theory.

Søren’s work has been covered by CNN, CBS, The Observer, The New Yorker and a number of other international media have visited the island.